Last night I was lucky enough to attend an evening of glitz, glam and generosity in aid of two extremely worthy charities; Combat Stress and PICU, and what an honorable night it was…

The theme for the evening, held at North Cheam Sports and Social Club, was a Masquerade Ball which was a fabulous excuse to really make an effort! Having spent most of last week preparing for the evening- having hair and nails done, trying on dresses, shoes and masks, (I swear I probably tried on at least 100 of these- my face became the mannequin for masks in the party shop at one point!). Helping Mum sort her outfit too, (she’s a nightmare when it comes to dress shopping!), we were all very excited to attend the event and weren’t disappointed…

As guests arrived in their finest, wearing an array of beautiful (and some quirky) masks, we were invited to have our photos taken (prom style!) before taking our seats for dinner. For some reason, my left eye and giant head weren’t playing ball last night so we had to re-take our photographs quite a few times, which gave everyone a good laugh- at my expense (no change there then!).

The colour theme for the evening was very patriotic, with blue, white and red bunting and decor filling the room, giving the hall a Goodnight Sweetheart celebration feel to it. I had donned bright red lipstick, all I needed now was to draw a stocking line up the back of my legs, find myself a handsome war hero to swing me around the dance floor and I would have been transported back to a post war romance novel. Lovely. We were in for a real treat this evening! 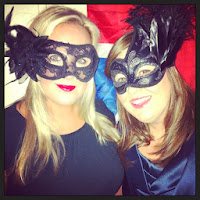 The tables were beautifully laid, with tasty cupcakes on each place setting. Guests were treated to an excellent four course meal; I was even catered to with a full on yumtastic gluten free meal- bread roll with my soup (that never happens!) and chocolate brownies for dessert (no stinking fruit salad- whoop whoop!), to say I was chuffed would be an understatement. Our dinner was even served by soldiers who had volunteered their services for the evening. During dinner, guests were treated to music provided by the Surbiton Royal British Legion Youth Marching Band, who were absolutely fantastic.

We got to meet the very fabulous and down to earth, Anita Dobson who was the guest of honour for the evening. She not only helped with the charity auction, but got the dancing off to fab start, showing off some of those Strictly Come Dancing moves!

But the most important part of the evening, was of course, raising money and awareness for two very important charities;

Combat Stress is the UK’s leading charity that specialises in the treatment and support of our British Armed Forces and Veterans, who are suffering with mental health issues due to their time spent serving their country. The care and support they provide to ex-service men and women is free of charge, but as a charity, they rely entirely on fundraising in order to carry out their vital work in helping veterans fight the psychological wounds of war.

PICU (Paediatric Intensive Care Unit)  at St George’s Hospital, supports a large paediatric general surgical caseload, as well as paediatric urology and ENT. The PICU are actively involved in research, which is ever growing and expanding and so rely on donations from charities to continue to develop their life saving work that has helped so many children, and their families.

As well as the proceeds of the event going to the two charities, raffles and auctions were also held in a bid to raise donations for such worthy causes. The evening was a huge reminder of how important it is to support local charities as they can only continue the precious work that they do with the aid of donations. Whether you have had a personal experience with a particular charity or not, there will always be someone in your community who has and it is important that we all recognise this and contribute when we can.

The event was organised by Nicola Blake and Kayleigh Waters, who along with their friends, family and local businesses, put together such a fantastic evening, one they should be extremely proud of and I’m sure the charities involved appreciated the huge amount of work they put into arranging such a successful event. So many companies and organisations were involved and I know everyone in attendance last night would agree that the event should be an annual one. So congratulations ladies!