Harvest, tells the story, seen through the eyes of Walter Thirsk, of an olde worlde English village under threat from the arrival of three new comers, two men and an attractive woman. On the night of their arrival the local manor house is set on fire. Over the course of seven days, their harvest is blackened by smoke and fear which leads to the cruel punishment of the newcomers, stirring up suspicions of witchcraft and treachery. The once peaceful village is plunged into a dark infested ciaos and only Walter will be left to tell the tale.

“As I’ve said, we’re not a hurtful people. We are, though, fearful, proud and dutiful. We do what must be done. But at this moment, so I’m told, the mood was murderous…”

This highly acclaimed fictional novel was shortlisted for the Man Booker Prize 2013 and has received phenomenal praise comparing him to some literary greats, which on reading the novel is undeniably deserved. His writing is quite remarkable and a style that I haven’t challenged myself to read in some years. The book itself struck a reminiscent cord with me. I had flash backs of being in my A-Level English lessons, surrounded by a small group of fellow students, taking turns in reading passages from a wide range of books. Books that we would never have encountered, given the patience or time to read had we been left to choose our own material. As I read Crace’s intricate and detailed words, I longed to be eighteen again to have my old English teacher reading with us, pausing at certain moments to discuss specific lines or tricky phrases, that with discussions would have given me a much better understanding and appreciation of this novel. That’s the beauty of schooling, to open up your eyes and ears to the new, the challenging and the unfamiliar.

“We ought to be content. The harvest’s in. Our platters are piled high with meat. There’s grease on everybody’s chin. Our heads are softening with beer. Yet I can tell our village is unnerved…”

Harvest transports you back to a time when people relied solely on the changing of the seasons to provide them with everything a village would need to survive in their simple, yet seemingly uncomplicated lives. A time where traditions give hope and community is your faith. In one particularly fascinating passage, Walter describes how it has been some years since he had last seen his own reflection, which is an interesting insight to the simplistic and basic life that the villagers lead.

“I’m handsome even, I would say. Indeed, I have been told that I look pleasing, especially in a hat or cap. Certainly, that is how I last appeared in a looking glass. But I have not had ready access to a looking glass for some years now…”

Dialogue between characters is few and far between and you rely greatly on the detail provided by Walter to fill in the gaps for you and bring you up to speed on the events that occur throughout the book. The pace of the book was constantly disrupted as you figure out what events Wallter was witnessing as it happened or simply relaying his thoughts from previous events. This constantly tested your imagination as you try and piece together the dark events that were unfolding.

“Whose version of events should I believe…Everything’s uncertain and unhinged because of her. She’s brought a curse on to our land, she’s blighted us…” 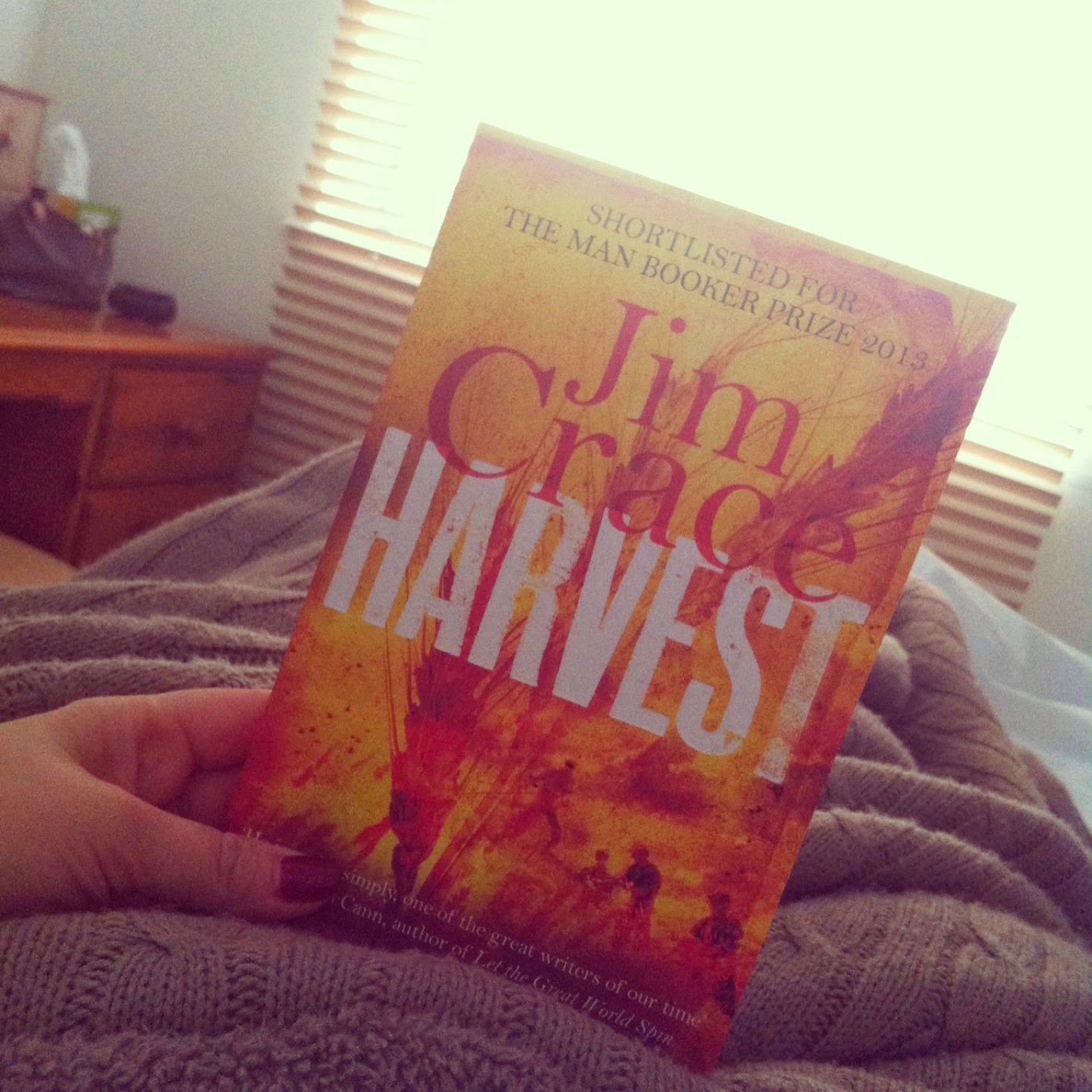 Although beautifully written, this book could be considered as a challenging read for some, myself included. From my theatrical background, this book drew on similarities with Arthur Miller’s The Crucible, from the issues of justice and peasants verses power in isolated villages, where the fear of the unknown sends characters into crazed frenzies, taking the law into their own hands. Harvest would suit anyone wanting to broaden their reading horizons and challenge the imagination.

Disclosure: I was kindly sent a complimentary copy of this book to review. All opinions are my own and have not been influenced in anyway.