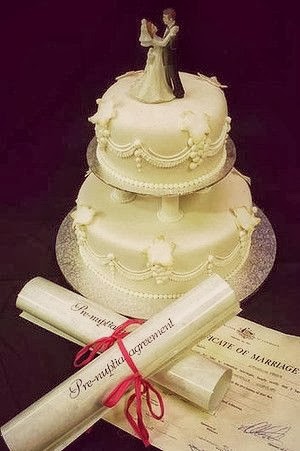 It may sound daft, naive, or even ignorant, but I don’t tend to watch the news. Particularly the 10 ‘o’ clock news. There’s nothing like some shocking news story to get your blood raging just before bed. Leaving you tossing and turning with worry as you try to shake off the negative state of the world and the capabilities of the human race. I seem to have got into the bad habit of avoiding news stories and information that will inevitably leave me annoyed, anxious and generally peed off.

We’d all like to live in a perfect world where nothing bad ever happens and everyone lives happily ever after. The news, for me, is a constant reminder of everything that is wrong in the world. But last week there was a topic that hit the headlines that caught my eye, (and that wouldn’t give me a sleepless night) which was the Prenuptial Agreement Debate. Now here’s something I can relate to…

This is a subject that isn’t new to the news world, but last week it got me thinking. To the normal person, prenuptial agreements are usually thought of for the rich and famous, but they are apparently becoming more common for us ‘common’ folk. I presume this has more to do with the fact that as most of us are settling down later in life, we have had more time to achieve financial stability independently and so therefore are more protective of our hard earn assets. But what did take me by surprise is that according to the Office for National Statistics, 42% of marriages end in divorce in the UK. Wowzers…the odds aren’t particularly in anyone’s favour. 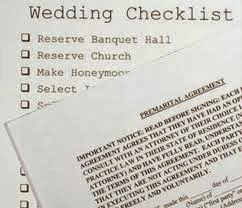 Does a prenuptial agreement mean that you are prepared for your marriage to fail?

Some people argue that you shouldn’t be getting hitched in the first place if you’re considering a prenup. Well that depends on what is at stake. Personally if I had gained a hefty inheritance or earned a generous sum independently and my spouse-to-be had zilch on entering our marriage, perhaps I wouldn’t think twice about signing a little “insurance” agreement to secure my assets…and vice versa. And that’s coming from someone whose wedding was themed “An Enchanted Forest”. I may want to live in a Fairy Tale most of the time, but sadly that isn’t the real world. But I don’t think it would mean I loved him any less or thought that our relationship wasn’t as true…would it? We’ll never know, because we both had sod all to begin with and everything we accumulate from here on out will be achieved equally, there is no his or hers, just ours.

In an ideal world, if the Hubster and I did decide to split amicably, I’d like to think that we could settle our assets 50/50 in a healthy and pleasant way that spare us both from any unnecessary pain. But the reality of this is both unknown and probably unrealistic. On the other hand, if the Hubster decided to do the dirty on me, I know I would probably turn into a raging gremlin that would want to take what is rightfully mine and more. Including his reproductive parts. Hubster, you’ve been warned. 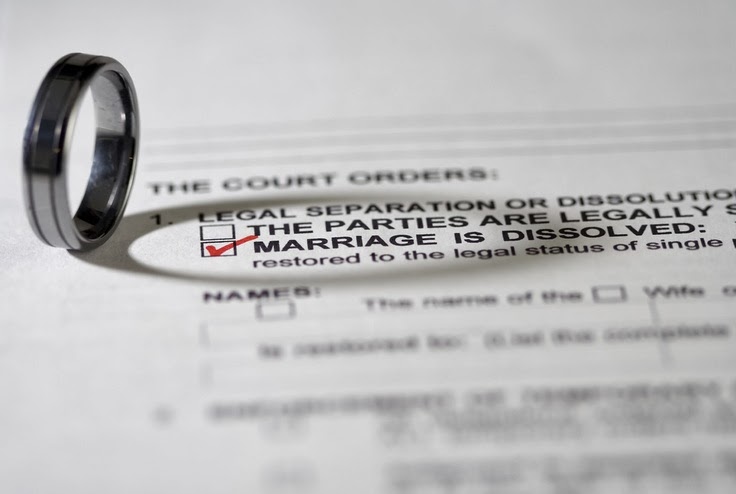 So why shouldn’t everyone get a Prenup before they say I do?

Aside from signing a prenup prior to marriage to secure our personal assets, should everyone be made to sign a pre-nuptial agreement that protects the rights of your future children? Now this is something I agree with. Although my parents have been married for 31 years, some of my friends and children I’ve worked with haven’t been so lucky. I’ve seen the effects that divorce can have on children and it’s not pleasant. According to an article in the The Guardian, the Law Commission wants prenuptial agreements to be binding in divorce cases, particularly where financial responsibilities to children are concerned. Currently if a prenuptial agreement is signed before marriage, a court can still overrule and alter the terms originally agreed.

Divorce does funny things to people and although the children are usually at the forefront of the adults minds, their egos, prides and hearts tend to steer the battle. Would I have signed a pre-nuptial agreement to protect our future children…? Yes, I probably would. We never know what our future holds. The children are always the ones that suffer in the long term, so anything that causes them less pain and distress in my book is a good thing to put in place.

What are your thoughts on Prenuptial Agreements?