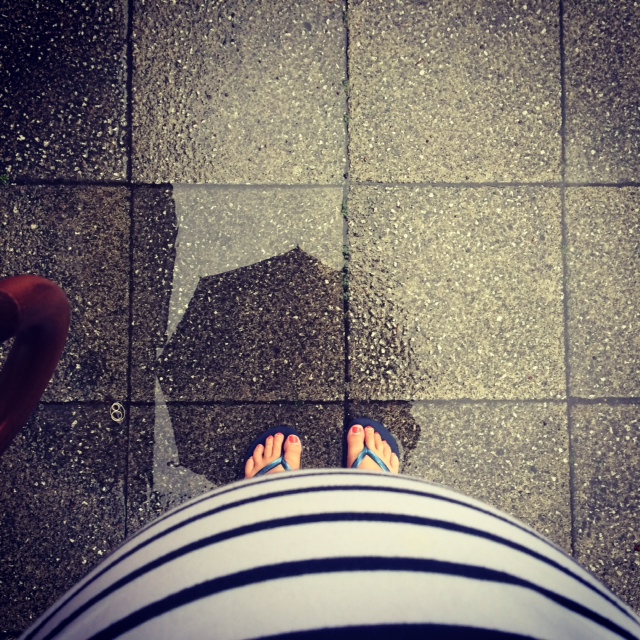 It sounds like I’m off to do a stint in prison doesn’t it?Well according to most of my friends I’d probably get more sleep in prison so that might not seem like such a bad exchange in a few months. I hear the food is rubbish and the showers are horrendous, but it’s a small price to pay for a few undisturbed hours of kip right? I’m joking…obvs. But in all seriousness, with only a few weeks, days, or hours (god I hope not hours…I need to shave my legs) until life changes forever, what is one meant to do with those last few moments of freedom, and normality? I’m hardly in a position to hop on a last minute expedition to somewhere exotic or do something adventurous. Gee, I can just about make it to the corner shop for milk before I need a wee.
There was mention of a trip to Brighton with the Hubster, but on seeing me ‘twoddle’ (as he calls it) to the car with as much speed as a sedated snail, we decided that any ‘day trips’ that involve any form of movement will have to be postponed now, at least until there’s no longer a head using my bladder as a bouncy pillow. I can’t argue with that.
There’s a part of me though that feels like I should be making the most of this precious time and that spending it watching endless re-runs of Teen Mum is simply a waste. But the heavily pregnant side of me doesn’t want to do much else. I’ve fallen out of love with reading bizarrely- I can’t seem to concentrate on anything long term. Whenever I’m out anywhere, I’m longing to be back home in the comfort of my PJ’s and with my cankles propped up in front of the fan. What a bundle of laughs I am right now.
I’ve pretty much lost the umph to do anything, which can only mean that I’ve come to the end of this journey and I’m now storing up precious energy to get us through the last mahoosive hurdle. Eek doesn’t quite cover it. At least that’s what I hope it is because there’s a Monica-esque voice in my head that’s screaming at me to get off my wobbly butt and clean out the cutlery drawer and re-arranging the filing cabinet before baby arrives and life turns into a chaotic mush. Great.
Another aspect that I’ve really struggled with this year is this blog. It hasn’t been given the love that it deserves, particularly considering the amount of time, effort and money I’ve invested in my little piece of cyberspace. I had such big plans for it, but ever since my pregnancy took over I feel like I’ve neglected the one thing that actually kept me sane all throughout our baby trials and tribulations. I’ve got the longest list of dusty old draft posts and video ideas that I never seem to have the energy to write or the excitement to create. Which is really sad because I wanted this blog to go places. I didn’t want it to become one of my usual whimsical fads which fades just as things are going well. But I can’t help but feel sorry about the times when I’ve felt like it’s been a chore to keep up, just because I can’t keep my eyes open.
I can only hope that once our little bean makes an appearance that this mummy to be can finally regain even an ounce of her former self and pick up where she left off, because I know she’s still got a lot to give to the world of blogging. Let’s hope so hey. In the meantime, whilst we wait for the Big Day, I’m going to relish in my last few days of freedom and try not think about ‘what I should be doing‘, but instead only focus on ‘what I want to do‘…which pretty much involves a whole lotta’ nothing. Perfect.
Until next time…
With Love & Precious Freedom,